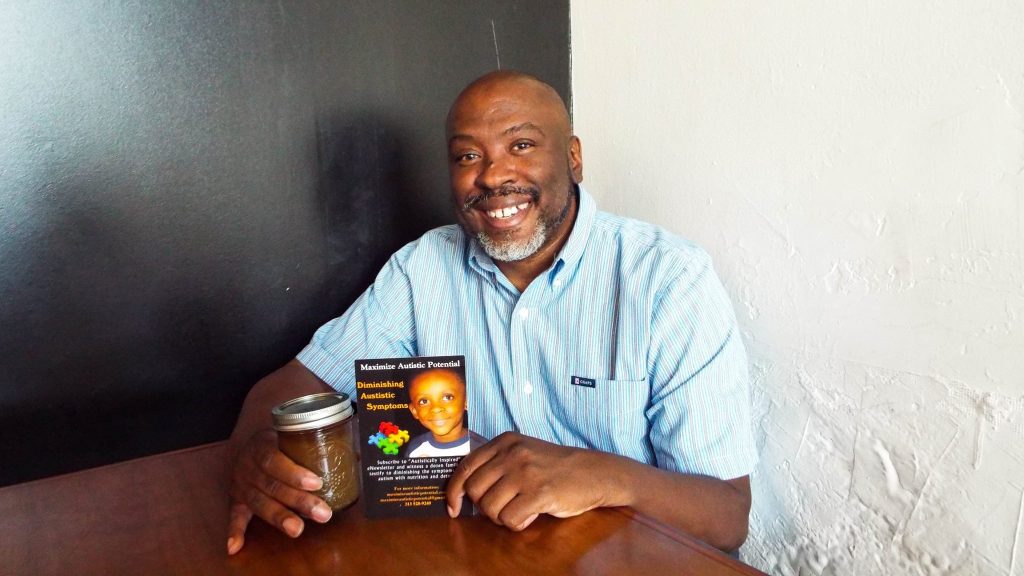 This is the fourth post in “People of ProsperUS,” showcasing the incredible stories of entrepreneurs connected to ProsperUS.

“[My business is called] Maximize Autistic Potential. Over the last 11 years, through trial and error, we’ve come up with a completely natural protocol that diminishes autism symptoms in children. We’ve been helping families for about the last 10 years. I have a degree in biology which helps me look at what doctors and scientists are saying about what is happening in the bodies of children with autism. They said things like overgrowth of pathogens, inflammation, excess metals, etc. One of the first things we did was develop a nutritional drink; it has about 150 different plants in it and we use it to address the pathogen overgrowth, the inflammation, and the metals.
A lot of children get better very quickly, some almost immediately.
My son has been doing it for about 11 years. He’s been in the regular education system since first grade and had a 3.6 GPA in the first two quarters of 8th grade. We did that all naturally. What we’re trying to do is reach more people and get more people to where they are happier with the state of their children’s autism by diminishing those symptoms.”

ON STARTING A BUSINESS

“I have two children affected [with autism]; my son stopped talking at 18 months. I didn’t know what to do. I didn’t know what that was. My older son has Asperger’s. I never even associated his shyness with anything. When the second son went from talking to not talking, some bells started to go off in the sense of ‘what is happening to my son?’ So, I think what happened to me was circumstance. I became sick myself with excess candida in my body from antibiotics for too long. I was feeling a burning sensation in my hands and limbs and the doctors told me it was too much stress. So, I did a little research and I found out that it was candida, and I kept seeing it associated with autism. I took a probiotic myself and happenstance gave it to my son. Within three minutes my non-verbal son said the words ‘pretty earrings.’ At that point a light bulb went off like ‘what the hell just happened?’ I’ve been on that journey since that time 11 years ago, and we’re constantly finding ways to tweak and improve for the next child that comes along.”

“To get a clearer idea of how we wanted to structure the business [for profit or not-for-profit], we ultimately ended up with a for-profit company because i wanted to have something i could leave my children with. Also, they’ve helped me in structuring my business. Before I did the ProsperUS class, I was doing 1-on-1 consultations [with my clients]. I would lead you, the family affected, on all the supplements, how to do them all, and all of that stuff and it was a very difficult two-and-a-half hour process. ProsperUS gave me a clearer idea about how to do it…The idea now is to put all the information about what autism is on my website. ProsperUS [allowed] me to have a more professional looking website so that I can get business from other areas as well.”

ON ADVICE FOR ENTREPRENEURS

“My advice would be to become as organized as you possibly can. That’s what was great about ProsperUS. They had me look at my product in terms of my competition and had me change how I would market it.”

You can visit Walter’s business for more information at: www.maxautism.com

Thanks to our team of DukeEngage Detroit Fellows, Ali Frank, and Prath Patel, for their work in sharing the stories of ProsperUS Detroit entrepreneurs during their summer in Detroit. Would you like to be featured? Let us know!